The headgear company was founded in 1920 in Buffalo, New York as the E. Koch Cap Company, by German-born Ehrhardt Koch. He borrowed money from his sister and co-worker at the Miller Brother’s Cap Company, and ran New Era until passing on to his son Harold in 1953 before his death a year later.

Initially using Koch’s innovative production methods, they made Gatsby-style caps and this early success resulted in the rebrand to the New Era Cap Company. But it was Harold who arguably shaped the future of the company as he noticed trends were changing and demands for fashion hats declining.

Growing in popularity was professional baseball, and importantly so was the New York Yankees Babe Ruth.

The ballcap dates back to 1860 and the Brooklyn Excelsior’s baseball team uniform (later the Brooklyn Dodgers), made from wool with a leather bill. Designed to keep the sun out of the eyes of the batter and catchers, it was fast becoming a fashion accessory and Koch wanted in.

They couldn’t breakthrough to the Yankees at this stage as Spalding dominated the sports equipment manufacturing (started up by ex-Boston Red Stockings pitcher AG Spalding).

But as Buffalo is western New York, it’s the economic centre between Boston and Cleveland. Ruth’s (The Bambino) previous MLB club (now the Red Sox) was also unavailable, but in 1934 Harold signed up the Cleveland Indians (now the Guardians) for the first of many Major League Baseball contracts.

WWII caused production issues, but clients included the Brooklyn Dodgers, Cincinnati Reds and Detroit Tigers. And in 1954 after Harold took over he radically redesigned the fitted pro baseball cap and name it the 59Fifty. Where previously the baseball cap was loosely fitted, now it was stiffer to make the logo more apparent. And what’s more, exact replicas of what the pro’s wore were available to buy.

In the 60’s, the MLB invited New Era to sell directly to every team at its annual Winter Meetings to open up exclusivity within the sport. And the impressive thing was it continued family run as Harold’s son David took over, before passing over to his son Chris. Four generations to continue traditions with passed down knowledge, overseeing exclusivity deals with MLB and expansion into American Football with the Buffalo Bills, the NBA, NFL, Cricket and beyond.

Turning a hat into a fashion accessory

In Hip-Hop, Gangster Rap group NWA (Easy-E, Dr Dre and Ice Cube et all) had custom hats made with the bands name on to bring baseball caps into modern culture.

In 1994 Spike Lee requested New Era make him a red Yankees hat to match his jacket, instead of the traditional blue, turning the company into a lifestyle brand as it diversified further from sports into popular culture.

Is New Era a good brand?

Yes, they produce high-quality headwear and often cited as the best hat company as proved by their 100 years in the industry and numerous collabs with the likes of Supreme and Slam Jam. They are not the official hat provider of the 3 major US leagues by chance, and if you want any team merchandise they should be your number one stop.

Brand Reviews are positive, with many praising the quality and great customer service, which is all you can ask for really.

The company have stuck close to their roots in naming their styles after the decades where the style was influenced. Each purchase has a sticker on the visor to indicate style, size, and authenticity so you know it’s legit. New Era hats include: 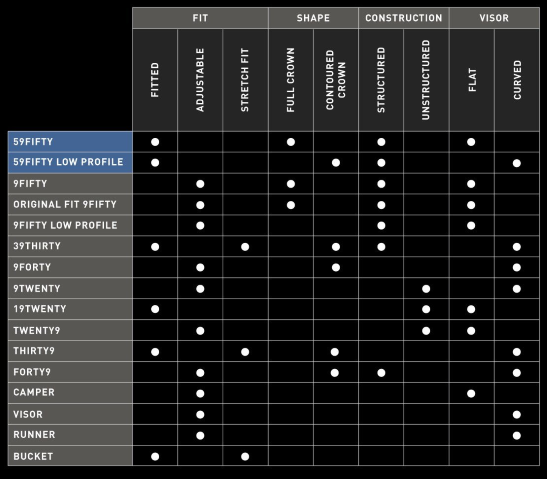 What is the FIFTY style?

The 50 style relates to the 1954 introduction of the constructed crown to reinforce the front to keep the shape for the logo. There are also variants for a low profile and retro crown.

The classic 5950 is a fitted and structured cap with a constructed crown and flat visor that can be curved. It’s the most popular New Era hat and put them on the headgear map. It comes in various sizes (1cm difference between them so head measured is a must) rather than a one size fits all as has no fastener.

The 950 has a flat visor, full crown and adjustable plastic snapback, and is basically the 59FIFTY but the adjustable version which has grown in popularity for those buying online. So it’s the same style but with an adjustable snapback fastener (yes, the term snapback actually means the plastic clips to adjust the size and not the hat itself). The hat comes in child and adult size, so all you have to worry about is the design and colour you choose.

What is the 39THIRTY style?

The 3930 are stretch fit caps with a contoured crown and pre-curved visor. The one size fits all hat is made of spandex for stretch and has a sweat band to help with sports. Commonly known as the dad hat style it has a snug fit so all good until your big headed mate borrows it.

What is the 9FORTY style?

The 940 is a mix of the 39THIRTY pre-curved brim and the 9FIFTY adjustable strap (usually Velcro or a buckle). So in short a curved peak adjustable (non-snapback) constructed crown for shape.

What is the TWENTY style?

The 20 style is a throwback to the decade’s style of baseball hats and is an unconstructed crown so is soft and shaped to the head.

The 920 has a pre-curved brim and adjustable strap at the back, with a soft crown. The plus side is it can be rolled up or packed in a suitcase. In short, this is the curved peak version of this style

The 1920 has a high unstructured crown and a button top, and is the flat brim style for the ultimate old school look.

The 2920 is the same soft crown style and pre-curved brim but is the fitted version.

Named after the truckers who often wore them as cheap giveaways, these popular styles have a construction crown with foam padded front and and mesh panelling. This makes them light and bendy.

We’ve written a dedicated and detailed breakdown on the difference between truckers and snapbacks.

Adjustable one size fits all

These can be either straps with pin and hole, Velcro or the plastic snapback fasteners. The strapbacks have the best longevity as Velcro can wear out and the plastic nodules on the snapback can snap off with overuse.

Stretch fit one size fits all

Made with spandex that stretches to contour around your head for a snug fit.

Coming in a variety of sizes roughly with 1cm difference, they retain the shape well but not ideal for growing children.

What is a Gatsby Style hat?

Think Peaky Blinders here or the newsboy cap or cabbie hat of old films. The front peaked panelled cap made of wool, linen or cotton had a button crown.

How to Clean your New Era Cap

All headwear needs a good wash now and again, and to be looked after to keep it’s shape.

To remove dirt, fluff, dust and hair, you can use a lint roller or Sellotape wrapped around your hand sticky side up to give a gentle clean. Small patches of dirt can be cleaned using baby wipes or a soft wet sponge (avoid a coloured cloth where possible to avoid colour running) or a bristle brush.

Do not soak caps or put in the washing machine as it will use it’s shape, and avoid detergents as some may contain bleach.