Who owns 11 Degrees and how did it start up?

11 Degrees Clothing is an urban fashion brand from the UK. It was started in early 2014 by Gary “Gaz” Beadle of Geordie Shore fame (as the face of the brand and original 11 Degrees owner), with Andrew Hayton.

Andy is relatively unknown compared to his famous co-owner, and is most notably the former owner of Urban Celebrity prior to the JD Sports buy-out). The online streetwear retailer started online in 2010 back when Justin Beiber was on my bedroom wall.

They stocked Streetwear fashion labels like Religion then later Judas Sinned, Dead Legacy, Friend or Faux, and Good for Nothing, until April 2013 when they took on Sik Silk who broke into the mainstream to huge success. 11 Degrees was started 9 months later, I presume in an attempt to replicate the success driven by Gaz’s celebrity influence.

The startup is one thing, but what is interesting however is that in 2016 the new principal shareholder was North North West LTD. And as of April 2018 Gary Beadle Promotions Limited was no longer a shareholder. So did Gaz leave 11D and no longer the 11 Degrees clothing owner?

This does make sense if you look at their website as prior to that he was the main man, and Eleven Degrees was all he wore on his social media. A few months prior he and Emma McVey had a son Chester, so perhaps this was a factor? Gaz had already quit hit MTV show Geordie Shore to focus on family life, so is this also part of the “new life”?

Speculation aside, the 11 Degrees website started to introduce new models and today Josh Flannery and Brandon Myers are more prevalent. He’s even been wearing brands like Scar Tissue on his social media and there is no mention of 11 degrees on his Wikipedia page.

Going back to the beginning of the menswear brand, despite Gaz coming from Newcastle it was always run out of Kendal in the Lake District (where both Andy and Christian hailed from). With Urban Celebrity and 11 Degrees having the same returns address, it’s safe to assume they are run operationally from the one place.

At the beginning of the year, the confirmation statement on companies house said all directors and owners were the same. But this summer the website has been updated to show the Hut Group in the footer. So there is a high chance the brand is now owned by The Hut Group. This would be an interesting move by the owners of My Protein and Look Fantastic.

My guess is the Hut Group now own 11 Degrees, but until companies house is updated in January we won’t know as there has been no press about it.

Why are they called 11 Degrees?

There is little information out there about their beginnings, name or logo. I wanted to know why are they called 11 Degrees. With Andy being a massive Manchester United fan and regularly going with the Sik Silk boys, there is the possibility it could be related to Ryan Giggs number 11 shirt. It certainly has a football feel to the style of the font used.

Perhaps it’s short for Eleven Degrees North, seeing as the later parent company set up was called North North West (and there is also another called South South East) so could easily be compass point related. Their logo is a nice and easy number eleven with the degree symbol. They had obviously learned from Silk Silk that having a clear logo means you can be found easier.

The Success of 11D

The 11 Degrees success story should all be about Gaz and his party lifestyle, and his 1.7 million Instagram followers at the time which grew to 3.5. His fame on Geordie Shore and Ex on the Beach, but more importantly the public and media fascination with the serial shagger meant plenty of free advertising opportunities.

They also caught the Sik Silk wave at the right time, coming shortly after. There are also some big-name link-ups with Tony Bellows, Carl Frampton, DJ Ben Nicky and cricketer Ben Stokes, with some great videos on their Youtube page. One thing is for sure, we are interested to see how it pans out without Gary Beadle (Geordie Shore) as the face, but a million-pound advertising campaign will help soften the blow. 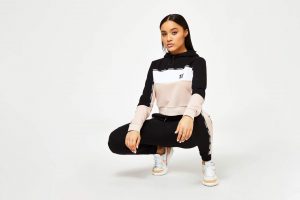 The clothing brand caters for both men, women and children. They have a large range of collections, including skinny jeans, t-shirts, jackets, tracksuits, etc. The brand also has authentication holograms, branded buttons and rivets so it’s easy to know what is genuine and legit 11 degrees. We always recommend you buy clothing brands from official retailers.

Due to the popularity of the brand, there is high demand for great sales prices and 11 Degrees do not disappoint. They have always done an 11 Degrees Black Friday Sale and already have a page set up ready to go. Their social media and newsletter is the best port of call for early bird deals. In general, the 11D price points are good, but you can grab some real bargains in their frequent sales which mean their garments are totally worth it.

Is 11 degrees a good brand?

11D clothing is highly popular for a good reason, the quality is high and design on point and always sold well at any retailer that has show-cased it. Customer Reviews will always vary, as the big brands have so many orders they have to rely on warehouse and logistics companies.

Purchasers will always be more likely to leave a bad review than a good one, and picking errors will happen, as will delays in deliveries. You are fully covered when online shopping to get refunds if any clothing brand does not deliver what you paid for.

They’ve also made moves to more ethical production and have launched a sustainable collection using responsibly sourced fabrics, which is great to see.

Who founded 11 degrees clothing?
11 Degrees was originally co-founded early 2014 by Gary Beadle (Geordie Shore) and Andrew Hayton who owned Urban Celebrity clothing store.
What is 11D
Other than the shortened name for the clothing brand, 11D is also a steam locomotive and an exoplanet that orbits the Kepler-11 star.
Advertisement