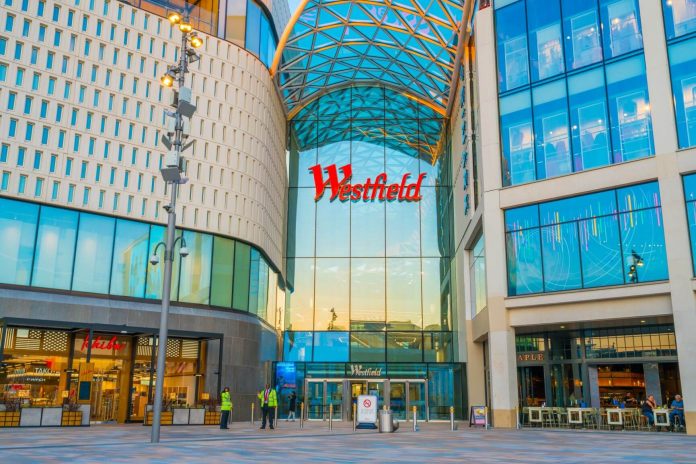 England has plenty of extravagant shopping centres, full of high street and high-end stores. These centres are perfect for those in the mood for a shopping spree or an evening at a restaurant. The best shopping centres have restaurants, bars, entertainment facilities, parks and shops all in one location.

Here are the best shopping centres UK has to offer.

Manchester’s Trafford Centre is the third-largest shopping centre in the UK, the largest in the North-West and has over 280 shops including the Couture Club flagship store. It hosts huge department stores over 3 floors, like John Lewis and Selfridges and

In the centre is Europe’s largest food court, The Orient, and based around this is four key areas Barton Square, The Dome, Regent Crescent and Peel Avenue each with key shops.

The Trafford Centre also contains Legoland, Laser Quest, Adventure Golf and Sea Life. After morning shopping, you can take the family to these hit attractions!

Check out UK’s busiest cinema if you’re feeling brave or take a leisurely mooch around the hundreds of shops.

Fashion Shops in the Trafford Centre

Being the largest shopping centre in the North West, in the mecca of fashion of Manchester, there is no shortage of shops to buy womenswear, menswear, fashion accessories, jewellery, lingerie and more. Fashion Shops available include:

This shopping centre is located in the heart of Liverpool and has an open-air roof. Say goodbye to sweaty shoppers and hello to an easy-breezy shopping experience. Liverpool One contains six different districts, each with different tastes. For example, Peter’s Lane has more luxurious stores while Paradise Street focuses on technology and food.

Surprisingly only the 10th biggest in the UK, Liverpool ONE has a 14 screen Odeon Cinema and 36 hole mini golf course.

Take a train to London and visit Shepherds Bush for the ultimate London shopping experience. This five-floor shopping centre features a glass roof, elegant lighting and hundreds of shops. There is even a separate section, named The Village, for the most luxurious of stores.

There is also an entire floor for food – so you can stop and grab a snack halfway through your shopping spree!

Westquay offers over 125 shops, including a showcase cinema and Hollywood bowl. This is the largest Marland’s shopping centre, and it’s located near the docks. Visit superstores like M&S, John Lewis and Next for ladieswear, menswear, childrenswear and even homeware.

Westquay has undergone some major construction in the last few years. It now uses geothermal energy to power its heating, and the food terrace was redeveloped with some new restaurants.

Head to Sheffield for the indoor shopping mall, Meadow Hall. There are fifty places to eat and drink and over 12,000 free parking spaces. What’s not to like?

There is also a cinema with eleven screens so you can catch the latest movie release after a day of shopping.

Shopping centres are a brilliant day out for you and the kids. Make the most out of the wide array of shops available and enjoy some international cuisines in the food court. You can always opt for the entertainment facilities if shopping isn’t your thing, or the kids get bored. There is something for everyone in the UK’s shopping centres.

What Clothing shops are in the Shopping Centres?

Each shopping centre has all of the big names like Footasylum and JD sports.

What are the biggest shopping Centres in the UK?

The biggest in the UK is Westfield in London’s Shepherd’s Bush at just under 236 square km’s retail store place, which is the equivalent of nearly 22’000 football pitches. For perspective there are only 40,000 association football clubs, so it could host every club playing simultaneously.

But Westfield doesn’t even make the top 50 internationally, and is a third of the World’s biggest 659km2 of the South China Mall in Dongguan.

Here is a list of the biggest in the UK: