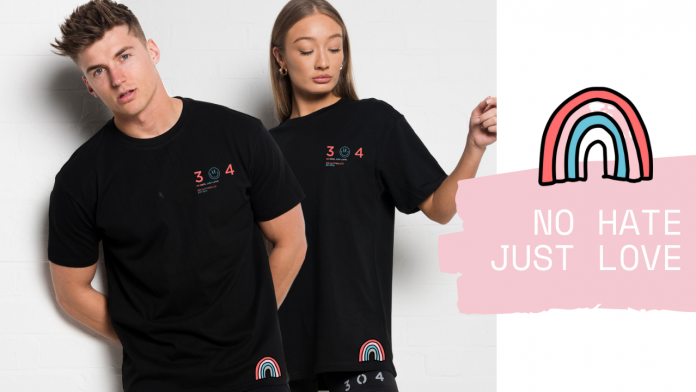 304# as it was first known was set up in 2012 by David Powell, Sean Cotter and Joe Lucas. This was back when Twitter was at its peak, so the use of the hashtag was quite unique and original at that point.

The brand was named after the door number of the Altrincham apartment they shared while at Manchester Uni, and they later rebranded to just 304, although their website was always 304clothing.com from launch.

They started with a Spring Summer 2012 collection, the same year as Sik Silk was born with their baseball jersey design.

And there were parallels as both bedroom brand labels used Tumblr and Facebook to build a cult following, battling it out for the attention of the youth crying out for something different in the fashion marketplace.

Unlike Sik Silk who produced their first collection made to order with unique designs, the very first 304# range were vests purchased from a high street shop with hand-cut felt letters ironed on. These can be seen halfway through their launch video below. This might explain why their Scarborough rivals had more early success to catapult them to the heady heights of today.

But either way the boys at 304 had a product different for the market, and young adults bought them and wore them to music festivals, Ibiza and beyond, and the demand grew. The after-work hobby was becoming a sought after lifestyle brand.

Each year the boys would take a summer road trip to America, and this became the design and cultural inspiration direction and they pressed on. They knew they wanted cool designs, premium quality, all at a price point their consumers would love.

They were Manchester uni students themselves so knew the summers of festivals and partying had a captive audience for stand out pieces. And they knew they could deliver to a welcoming audience with in-demand designs.

Joe Lucas left the brand in 2015, and the brand returned home to Birmingham with a HQ in Kings Norton. 304 clothing owner DMP brought in his old school friends from St Augustine’s Catholic High School in Redditch; Alex Regan and Jon Hutchins, to help make it the success it is today.

It could have been a different story though, with 2017 not being a year to remember. Firstly, their offices were burgled with all their computer hardware stolen, and some early edition clothing were taken. Then a huge fire gutted their warehouse and destroyed the entire stock.

While some unfairly jibed of an insurance scam, fans of the clothing brand supported the boys to build back up again.

How did they get successful?

The brand have always aimed for timeless over fast fashion, always ensuring high-quality textiles are used. With their on-trend designs, they have ensured they stand-out in the crowded streetwear market, even if ultimately Sik Silk became more well known over the passing years.

From a marketing perspective, they have always had good ideas too. They were the first to do a mystery box that I ever saw. Yes a cynic like myself might just think it’s an excuse to pass off excess stock, but it doesn’t mean low quality or unpopular designs. I’ve been involved in range planning and often clothing brands over order on what they think will be popular, but that doesn’t mean it’s inferior. The 304 clothing mystery box reviews show a lot of happy customers.

David and Sean always stuck to their plan and the fact it is still going 9 years later is a positive one. They’ve also not forgotten apartment 304 and how it launched a lifestyle as well as a clothing brand.

Yes, 304 has been a great brand for nearly a decade and is legit. The clothing has a lot of excellent reviews praising the quality. With eCommerce stores, you will always find reviews complaining of issues with delivery, but that is outside of the brand’s control. This is part of the online shopping experience, but 304 do recognise the importance of customer satisfaction at least and have over 5260 reviews on Trustpilot at the time of writing.

They also stay current with designs and models such as Brandon Myers and increasing their reach by linking up with some big retailers like ASOS and I Saw it First. Providing both menswear and clothing for women and juniors, it really is an inclusive brand for all.